Édition collector limitée à 2000 exemplaires, exclusivement en anglais.
Les plus part rapport aux boîtes standard Treefrog et Iello:
- Une plus grande carte (plateau de jeu)
- Des figurines en bronze pour incarner les 4 apprenties sorcières
- Un poster
- Une boîte plus grande avec une illustration différente
Et pour ceux qui lisent l'anglais, un copier-coller du site de l'éditeur:
The Witches is set in the magically charged land of Lancre. Players take on the role of trainee witches, such as Tiffany Aching and Petulia Gristle, learning their craft and dealing with all the problems that life on Discworld can throw at them. A subtle blend of headology, magic and, of course, the all-important cup of tea will see our heroines tackle everything from a sick pig to a full-blown invasion of elves.
Life can be tough for a young witch in Lancre, fear not however, a cast of some of Terry Pratchett’s most famous characters will be on hand to aid your quest. Along the way you’ll meet Granny Weatherwax, Nanny Ogg and Magrat Garlick, along with a rich supporting cast of familiar faces from some Pratchett’s bestselling Discworld series. When things get really tough and you feel you are turning ‘Black Aliss’ you can always have a cup of tea with one of your fellow witches. The game can be played with up to four players, and can even be played solitaire.
The Witches is more of a gentle family friendly game, well, as friendly as you can get with Nac Mac Feegles hanging around, rather than the back-stabbing experience that is Ankh-Morpork, and can be played co operatively if players so wish. Once again Sir Terry Pratchett and the folks at the Discworld Emporium have made sure that each character is faithfully represented, with all of the artwork being produced by Peter Dennis. 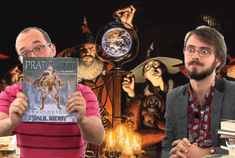 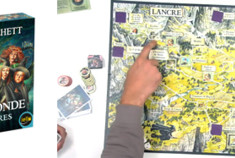 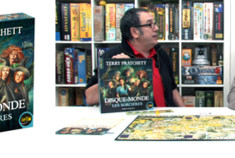